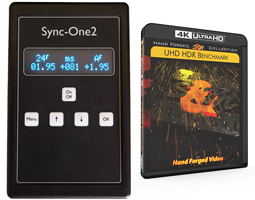 Spears and Munsil, the renowned developer of display calibration discs, have launched their new UHD HDR Benchmark Blu-Ray disc.  Whether you’re a home theatre novice or a professional calibrator, all the tests you need to evaluate and adjust your HDR displays are on this new disc.

Whilst the 2nd edition Blu-Ray contained AV sync tests that Sync-One2 can use, this new version contains specific test patterns for use by Sync-One2.  Making getting the sync right even easier.

Many thanks to Stacey Spears for including the tests within the new disc.

You can buy a Sync-One2 bundled with a discounted copy of the Spears and Munsil discs on our on-line store.

Spears and Munsil can be found here.